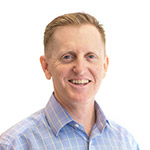 Allan graduated from UQ with a Bachelor of Human Movement Studies in 1990. He then went on to complete a Bachelor of Applied Science in Podiatry at QUT in 1993.

Starting work in Rockhampton in Private Practice in 1994, he has extensive experience in all facets of Podiatry. Allan has maintained his Podiatry services continually in Rockhampton and Yeppoon ever since.

With a keen interest in sporting performance and injury prevention, Allan has been involved in playing tennis for 30 years. He spends time with his family who are involved in Netball, Touch Footy, Swimming, Running and Waterpolo.

The opportunity to combine professional Podiatry services and a retail footwear outlet, aiming at sensible, comfortable footwear was taken up in 2009. CQ Podiatry – Footwear for Life is located in Allenstown. 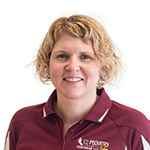 Kathy Bishop graduated with a Bachelor in Health Science majoring in Podiatry in 2005. Upon completing her degree Kathy operated the Rockhampton Podiatry Centre until 2012 when it merged with CQ Podiatry/Footwear for Life. Kathy has a passion for podiatry and makes professional development a priority, most recently completing a course in Foot Mobilisation Techniques to better treat patients for musculoskeletal conditions.

Katie has been working in Podiatry since 2010, after graduation from QUT in Brisbane. While living in the UK, she also studied at the North London School of Sports Massage. As a local Rockhampton girl, we welcomed Katie to our practice in January 2014. Katie has a particular interest in paediatric podiatry and biomechanics.

Catherine graduated from CQUniversity with a Bachelor of Human Movement Science in 2010. She then went on to complete a Bachelor of Podiatry Practice with Honours in 2018. Catherine is a local Rockhampton girl and joined the practice in 2019. Catherine has developed an interest in diabetes foot care and enjoys helping others. In her spare time, Catherine enjoys spending time with her growing family. Catherine hopes to nurture her passion for podiatry through helping others.

We offer a full range of Podiatry services including:

We stock a wide range of footwear available from casual, work, sport and children's school shoes. Also some for those hard to fit feet.